Just kilometers from the most Northern tip of mainland Australia, on the white sandy beaches bordering the crystal waters of the Torres Strait, for the first time ever, nesting turtles are being tagged as part of an annual Turtle Monitoring Camp conducted by Apudthama Land and Sea Rangers.

Under the watchful gaze of a team of indigenous rangers, each nesting mother works slowly to scrape aside the sand with her rear flipper, digging away the damp sand to build her nest. It has to be the just right distance up the beach, the right depth in the sand and the right shape to properly incubate her eggs and provide enough air for them to breath when they hatch months from now.

On the Cape’s west coast, just south of the Jardine River Estuary is a 10km stretch of beach home to the largest known rookery of Flatback Turtles in Australia. The species is known to nest on beaches spreading the length of Northern Australia, though are still marked as under threat in Queensland. The data recorded by Apudthama Rangers and their protection from feral predators is essential in the conservation of this species. During the monitoring month, the rangers recorded the number of nests found and the GPS location to a database called I-Tracker. The database is a collaboration recorded by rangers from across Northern Australia, to assist in national understanding of land management. The main threats to the species is from fishing accidents, hunting and feral predators.

Laying bellies down on the sand next to her, the team of rangers watch as she begins to drop her eggs into the hole in runs, 2 or 3 soft shelled, white orbs at a time. With her eggs safe in the ground, the nesting mother once more works the sand with the precision of a sculptor, piling light layers across the top of the nest and packing down the sides to stabilise.

The entire nest is created and covered by feel, utilizing the dexterity of her back flippers, relying on her front wings for support. She then drags herself forward a few strides and makes another pile of sand to disguise the location of her clutch before turning her head back to the sea.

Exhausted, she pulls herself down the beach again, where she is met by the waiting team of rangers. Gently, they secure her in a ghost net and hoist her into the cool night air to be weighed, measured and tagged with a unique ID tag, before sending her on her way. 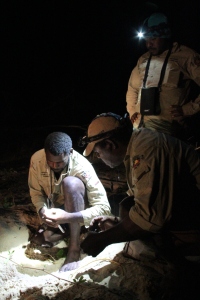 Each tag, attached to the animal’s right wing, carries a unique registration number that can be used to track the activities of that particular animal should they be collected by fishermen, conservation workers, hunters or rangers.

“For us, this means we will have the opportunity to keep track of the females that nest in this area,” said Senior Ranger Richard Woosup, “because nesting turtles will always return top the beach they hatched from.”

“Once we have most of the nesting turtles tagged, ideally, we will be able to record how often they return to nest, how many eggs they’re laying, their state of health and location they return to,” explained Senior Ranger Christopher Lifu. “It also means that if she is picked up by a fishing boat, or hunters out at sea, they can send her details to us, and where she was found, so we can keep track of mortality rates and at sea activity.”

This month, Apudthama Rangers focused on getting as many turtles tagged as they can each night, while also monitoring nests for predation and recording GPS locations of nests. They were joined by Community Development Trainer Shaun Seymour, who has experience tagging green sea turtles and assisting other Indigenous Ranger Programs. Shaun worked with ranger teams to assist in tagging and data collection, and continue training.

“During nesting season, there can be hundreds of turtles up on the beach each night,” said Ranger Francis Salee, ”with most returning two or more times to lay.

“It’s a big job for the guys to try and tag the majority of mums who come up each night,” said Apudthama Ranger Coordinator Warren Strevens, “as well as record nest and predation data, but within a few years, we can expect to start seeing some patterns emerging in the data.”

“We are looking at the long term here,” Ranger Coordinator Strevens said, “we don’t expect to see any really strong data for many years, but this is where it starts.”

Apudthama Land and Sea Rangers are camping in teams for the length of August, monitoring 10km of beaches along the East Coast from the mouth of the Jardine River to Crab Island each night. All data recorded during the month is entered into an iTracker database specifically designed and built by Apudthama Rangers to manage local data.

Now in it’s third consecutive year, the Apudthama Ranger’s Program is the most comprehensive turtle monitoring program conducted in our region. From tagging and data collection to management of known feral predators and protection of habitat, their work will help to sustainably manage sea turtles in the region. 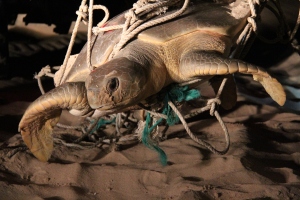 One thought on “Mothers of the Sea”