Sticky, gross, covered in dust and altogether too close to your face for comfort… a description that might easily be used for a number of things that day, but in this exact moment it was the tiny, little dark fingers making their way through my hair.

The fingers belong to a little boy, aged 3 or 4, just knee high to a grasshopper and conveniently the perfect height to reach my face as I sat cross legged on the dusty red ground.

Little belly leaning against my shoulder, fingers leaving a dusty grimy streak as he parted my hair and me sitting there wondering who the little boy is that is so enthusiastically lecturing me in indecipherable gibberish. I knew he must have been from our community and his mum or dad would be floating nearby but now it was just he and I, with only the wordless untangling and re-tangling of his dark fingers through my light hair to unite us, I only for a second. 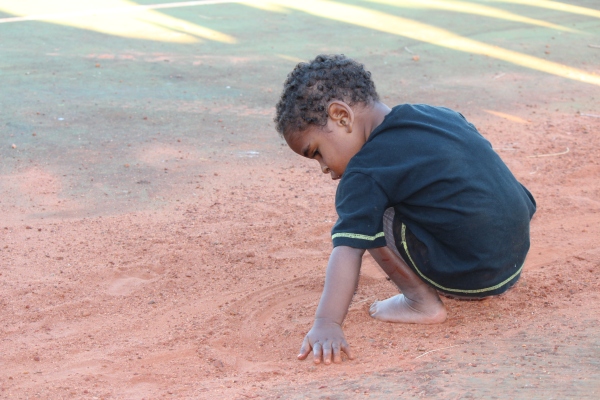 And then he was off. Tiny fingers extracted from the now sticky, tangled web and continuing on his way, leaping awkwardly to match his own footprints with those already indented in the dust by another child.

Working my own pale fingers through the tangles left behind, I watched the sticky fingered culprit continuing along his footprint trail, leaping from side to side with arms outstretched. Suddenly he stopped, feet splayed and arms out, turning slowly to inspect his back foot. Crouching down to the red earth, he pulled his foot to his belly for closer inspection, the footstep game forgotten. Bringing his tiny fingers to the sole of his foot, he slowly removed the cause of his disturbance peeling off a dusty red, sticky sliver of cooked onion that must have fallen from some one’s lunch.

His eyes lit up, and holding the prize aloft he ran from his dusty track towards another man sitting by the stands. There he pressed himself against the other stranger, his confused expression mirroring the one I had worn earlier. Our sticky fingered friend brandishes his prize in the man’s face before heading off again to another adventure.

It’s amazing. the confidence of these children to physically communicate with absolute strangers. I think that from a young age they are taught that physical contact is not something to be restrained or avoided, it’s okay.

I recall sitting with two ladies as a friend approached them pushing her young child in a stroller. As he rolled over, the ladies began to blow kisses and wave and as soon as he was within arms reach, they were all over him. He sat still, gazing adoringly as they stroked his face, hair, arms and hands, pulling at his cheeks and nose and gently poked his face and chest. As they moved their fingers lovingly over his face, he moved his own hand, following where they had touched.

These kids are confident in themselves, their own skin and their place among other people because from such a young age they are taught that it’s okay.