Her arm disappears into the thick greenery of her overgrown garden, emerging a moment later with a fat green tree frog clutched tightly between her frail fingers. The frog eyes us with some level of concern, and Laila turns to me expectantly.

I stare back at them. Not an overly unusual sight to see this lovely lady with some form of wildlife wrapped around her, but I haven’t joined the dots yet. Finally I get it. “Sorry Aunty, I don’t have my camera on me today,” I direct my response to both pairs of eyes on me, “we’ll have to do it tomorrow afternoon.”

Laila is my neighbour. She’s one of my favourite people. She is an eighty-something Swedish lady who has spent the better half of her life surviving the wild bush of Far North Queensland. Right now she wants me to take a photo of her kissing a tree frog to send to her adopted grandchild on Thursday Island. She blinks her big watery blue eyes at me from behind her horn rimmed glasses then looks down again at the enormous frog still squeezed tightly in her hand.

“Ok,” she agrees, “but we will have to use one of these, because the ones inside hide during the day and I can’t find them.” Returning the awoken amphibian to its hiding place, she starts off again across the yard, heading back to the house. Her frame is frail beneath her flowing Island dress as she walks, the colourful floral fabric revealing the extent to which the cancer has ravished her body.

Laila is amazing. You know, she used to race cars back when she lived in Sweden? She also has an aversion to wearing underwear, and she tells me that at her age, why should she have to? Aka, I tell her- aka means grandmother- Aka, you can do what ever you like.

And, well… that’s exactly what she does.

I spend a lot of time in her garden, sitting with her and listening to her stories, there’s a few. She’s one of those people whose life kind of makes you feel guilty when you decide to watch movies on a Saturday. At my age she was already raising two children, renovating her home, training a few dogs which would later be sourced by the Swedish military and killing her own chickens to cook for dinner.

Sometimes Laila comes over to my tiny house, in the middle of the red dust of our street, and teaches me to cook. Well, that is, she stands in my kitchen tutting, looking scornfully upon my attempts to follow her instructions and excuses for what is to be found in my own fridge. She often laughs at me, I’m sure my life is a great source of entertainment to her, but I know it’s out of love.

We go back to where we were sitting before the whole frog interruption. Her dog Hemi curls up at our feet, not that he really has to curl, his body is the size of a fat German shepherd, but his legs the size of a corgi, so he just kid of bends slightly and his belly is on the floor.  He’s a good dog, he keeps her going I think. I’m thankful for that.

When I had arrived earlier today, I could hear him barking from inside her rickety old house, but not her voice. I thought that was it. That this was the day I’d come around and find her on the floor or the bed… I fear that most visits. It’s not long now, and life isn’t as good now as it should be to someone as beautiful and amazing as her. But I suppose for someone that great, not even life itself wants to let that go.

Good. Lets hear some more stories then. When she first moved to the Cape, Laila lived in a farm house out at what was called Lockerbie Station. She lived there alone, and she told me that when she first moved there, the locals told her the area was haunted by ‘little people’, or scrub devils. She arrived at the home, and upon walking in she was met by an enormous python asleep on her bed-to-be. Never to be beaten, Laila walks herself out into the bush and calls out to the spirits.

“I told them who I was, why I was there and asked them to take care of me,” she tells me, blue eyes twinkling at the thought. “I slept out there that night, and you know, it was over a year later until I had another visitor in my house.”

Not that home visitors upset her, quite the contrary. “I had a visitor in my bed last night,” I remember Aka Laila telling me once. “Oh yeah?” “Yes.” She smiles wickedly. “I felt something behind me, near my bum, I thought it was Hemi, but I reached down to move it and it was bald! No hair!” she laughs, delighted at the adventure of it all. I don’t understand, “What? Who was it?” I ask.

“A little one,” she says, holding p her hands to demonstrate the length of the visitor. “A little snake, no hair! I thought it was Hemi’s tail!” She’s still laughing at the idea, while I’m still sitting there struggling to work out if the snake in her bed decided to bite her at being grabbed in the middle of the night her! “Oh no, of course not, I just asked him to move and he went,” she says matter-of-factly.

Then of course there is the time with the rat at the dump. No one can love all creatures, big and small, like this lady can. She once caught a rat who was living in her home (where many of the animals up here seem to reside) and drove him to the dump down the road, where she set him free. This next part she swears went exactly like this; “I set him down and opened up the cage and said off you go, you are free. He ran out a few meters, then he stopped, looked back at me to say thankyou, then turned and ran off.”

I believe her. She has a way with animals, she really does speak their language. The house and garden is alive and she knows the life and personality of each of her housemates. There’s a goanna living in the shed which we are all under strict instructions not to disturb, though I’ve never actually seen her.

Then there are the frogs. The frogs which ‘yump’ on her in the night (Swedish accent, soft ‘j’), until she gets up and chucks them outside, the frogs that yump on her in the shower and yump all around the house at night, knocking photos off shelves and making noise.

These are the frogs we are trying to catch next time. The ones in the house hide during the day, but there are some in the bush behind the garden that we can find, that we will have to look for tomorrow. The ones that look at you with those big eyes, not fussed at being in the aged hands of our mutual friend, and not adverse to posing for a photo with her for her granddaughter over on Thursday Island. The frogs are her company. She lets them live in her home, crashing around in the night and falling on her face as they argue amongst themselves to catch the bugs before the geckos do. Maybe they will miss her as much as I will when she goes… maybe. But I doubt it.

There are some things we don’t talk about.

These belong to you alone. They cannot be tainted or taken by exterior opinions. They reside in your beliefs and memory.

They are yours to keep to remain with you, in a purest incarnation within your soul.

Some stories are not meant to be shared, that cannot be understood through objective eyes.

There are some undeniable truths that will only ever belong to one.

I will keep you here. 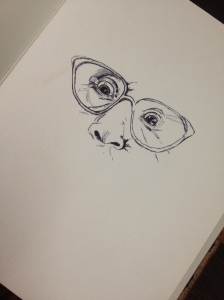